how to talk so little kids will listen; a review 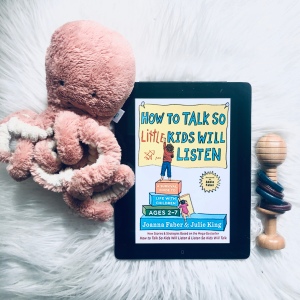 How to Talk So Little Kids Will Listen, by Joanna Faber and Julie King

My friend Jenn H. is a great mom of two, and suggested How to Talk So Little Kids Will Listen (along with Siblings Without Rivalry) when I asked her for parenting book recommendations. I had found that my patience with my son was often waning, so I wanted some advice. (Also, I am a far-from-perfect parent!) I listened to this book as an audiobook (I often enjoy nonfiction as audiobooks) and found myself constantly pausing it and asking Siri to make a note!

That being said, I clearly got a lot out of How to Talk So Little Kids Will Listen by Joanna Faber & Julie King and I strongly recommend the read! I made a list of notes that serve as good reminders, helpful suggestions and powerful strategies in how to parent and speak to your children in the most effective way. (I also found that some of these tips really could work on adults and dealing with conflict in our everyday lives!) There, of course, were things I rolled my eyes at, and elements that probably won’t work for my family specifically, but I am always willing to make adjustments and evolve as a parent. Check out my “Coles Notes” below and let me know if any of these tips resonate with you!

Punishment for when tools don’t work:

What kind of responses will inspire instead of encouragement?

1- Describe what you see. Instead of saying “that’s a beautiful picture” say “I see green lines zooming and red dots connecting everything!” Instead of “good job following directions,” say: “you say your spot in the circle right away!” Or just “you did it!” (Gosh, I have been working hard at this!)

2- Describe their effect on others. Instead of “you are such a good big brother.” You can say “look at how you’re playing with your brother … it makes him smile!”

3- Evaluative praise doesn’t work in the long run, based on research. Don’t tell children they are smart and talented because when they find themselves struggling, their faith in themselves is shaken. Praise effort instead.

4- Give three descriptive praises about what the child has accomplished so far before getting into what they need to work on. Descriptive feedback is more genuine.

Sometimes acknowledging feelings can be more impactful than praise.

In this case, praise and saying it looks like a bike won’t necessarily work either.  It’s time to switch gears and acknowledge feelings. “Urgh, you are not happy with how that bike came out. It’s different than it looks in your head! It’s hard to draw a bike.” This will help them feel you are acknowledging their feelings and will help them think clearly. (I felt that some of these tips can come off as condescending to the kids, so I wanted to make note of that here).

When kids compare themselves to other kids and they are “the slowest” at running for example, it is better to acknowledge feelings first than offer empty praise. “It’s annoying to be stuck with …”

Try: Wishes in fantasy. “Wouldn’t it be great if you could eat magic beans that would make you zip across the playground.”

Give your child a story of himself. “I’m pretty sure you are going to master those monkey bars because you are a determined kid. I remember when you were a baby and you were five months old and…”  or. “It’s weird and cool- everyone is different. Some kids can read by grade one but can’t ride a two-wheeler. We are all good at different things”

Plan for special one on one time

Shopping with children- get them involved

Lying is an important part of cognitive development

When a parent gets to angry:

Try and remove yourself. Come back and problem solve later with your child. They will learn that when an adult gets angry it is temporary, and that problem solving can be done later in a calm way.

So, as I mentioned above, some of these things are good reminders for things we already know, others are helpful alternative strategies. Some things I don’t know if I can actually give up (like rewards), and now that COVID-19 has taken over all of our lives, I think there will be many times I stray from this manual out of exhaustion, lost patience and frustration. However, I did learn some great strategies I have been implementing and were pleased to see they have been working!

I hope you benefited from at least one point I made a note on … and good luck with your kids at home during this unprecedented time in history!

Thanks for reading and happy quarantining!