the truth about forever: a review 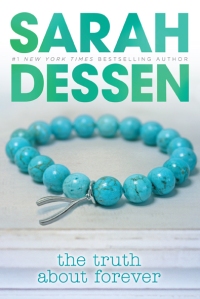 The Truth About Forever, By Sarah Dessen

This is going to be short and sweet, just like the novel I’m about to review.

Ever since the editor I referred to in my Packaging My Imagination post loosely compared me to best selling author Sarah Dessen, I thought I should give her a try. (Let me remind you that when I met with this editor, she was also reviewing my query letter, in which you should always compare yourself to better know authors. I just wanted to point that out so no one would think that I am actually comparing myself to Dessen).  Anyway, over the holidays, I did a little research and decided to read Dessen’s The Truth About Forever. I wanted to pick a book that the acclaimed author’s fans enjoyed the most, and would give me the best first impression. The Truth About Forever seemed to win by a landslide. (I later found out that it is also my sister Bridget’s favourite).

Overall, I thoroughly enjoyed the book. Although Dessen writes for a slightly younger demo than the audience I’m aiming at, I loved her storytelling. The novel was fact paced, humorous and slippery-smooth like butter. And although it was a lovey-dovey YA novel, there was some depth to it (two teenage protagonists dealing with death of a parent) and character growth (the main character, Macy, steps outside her comfort zone by lands an unlikely job, learns to communicate her emotions and acts out against her mother’s tight leash). These are all plot points that young girls can relate to and want to read about.

Even though I am now age thirty, I happily admit that I couldn’t put it down. Sometimes I just want a quick read that I can just enjoy, and don’t have to think about. (Let’s face it, I get most of my reading done on the subway, and it’s not the easiest place ton focus). I’ve never been one to toss aside a good love story, regardless of the characters age. And now that I’m writing my own novel for YA/NA, it’s important for me to read within that genre, and understand how authors deliver resonance with their readers.

At least, that’s my excuse.