I mean, holy smokes. I’ll never forget my first day at Coachella. My eyes were wide with wonder, my head was rapidly turning from one direction to the next, and for once I wasn’t talking a mile a minute.

In the daylight, giant inflatable astronauts and snails loomed overhead, balloons were set off into different patterns in the sky, and the desert sprawled before us endlessly.

At night, the balloons were illuminated, bouncing in the light breeze overhead, the palm trees were spot lit with bright, changing colours, and the Ferris wheel was elucidated in the distance.

No matter the time of day, bands and DJ’s could be accessed on a variety of stages, in several directions. Some stages and pits were covered, offering light shows for the likes of DJ’s like Alesso and Fat Boy Slim, while other stages remained out in the open, for the likes of Pharrell and Outcast, who utilized giant screens on the main stages for their performances.

Upon the lineup announcement, there were so many bands I was already eager to see. I downloaded some newer albums Ian and I didn’t already own, and we added albums we already did have to our “Friday” “Saturday” and “Sunday” playlists. (Ian gets the credit for making those!) But one of the coolest parts for me was opening myself to music I hadn’t learned of yet.

I discovered new bands/DJ’s that I love like HAIM, Capital Cities, Disclosure, The Naked and Famous, Martin Garrix, & Chvrches to name a few. Coachella also offered me the experience to listen to bands/individuals I liked but hadn’t listened too much of before my Coachella prep, like Lorde, Outcast, Lana Del Rey, Girl Talk, Calvin Harris, Beck, Ellie Goulding, Kate Nash and Chromeo. 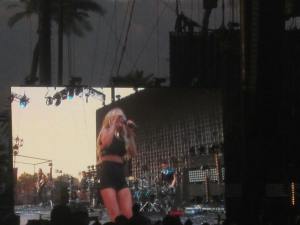 The sound was incredible, no matter where I was situated in the crowd. The effects and lights were amazing, and each act was like being at that band/individuals concert. And it was clear they were having a great time too.

The surprise guests were so exciting… the five of us went weekend two (well, Kieran did both weekends, lucky guy) and we had heard about the lineup of special guests Weekend One. We were hoping that for Weekend Two we would get even better guests, or at least some return offenders. And we weren’t disappointed (except for during Solange… Beyonce only showed up weekend one). Some of my favourite special guests were Jay Z, Diplo, Busta Rhymes, Pusha T, Usher, The Jabbawockeez, and T.I. performing with Pharrell Williams, Busta Rhymes  and Waka Flocka performing with Girl Talk,  HAIM performing with Kid Cudi, Sam Smith, Aluna and Mary J Blige during Disclosure, to name a few.

Everyone wore whatever they wanted. I didn’t feel like there was any judgement; and there was every outfit you could ever imagine at Coachella. (I mean, within reason. There were no fur coats, we were at a desert, after all). I loved picking out outfits that reflected a laid back, comfortable style, but also accessorizing with headbands, hats and jewelry. So much fun! Check out my Coachella Pinterest board here. 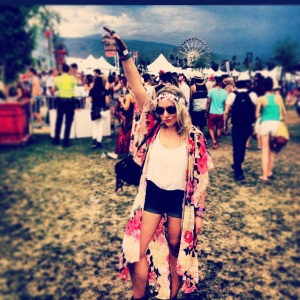 “Clap a long if you feel like a room without a roof,

Coachella wasn’t one of those festivals or concerts that people are constantly elbowing you or shoving you to get out of the way. In fact, I found the opposite to be true. (I’ll leave out the description of the fight Kieran and I got into during Lana Dey Rey; that’s neither here nor there). Most of the people we met were just happy to be there, laid back and interested in having a good time. And, oddly enough, we met more Canadians than we did Americans!

It’s a desert.  It doesn’t get much better than that.

The chance of rain is VERY unlikely.

The sun is warm on your skin, as you think about the snow you left in Ontario. (At least, that’s one thing that ran through my mind). Apparently the first weekend there was a sandstorm, but luckily, we didn’t have to experience that. I was ready with a scarf in my purse though!

Our house in Palm Springs

There’s something for everyone!

Attendees have the option to camp out, drive in, or take a shuttle. The five of us rented a house in Palm Springs and were about a 15 minute walk from the shuttle stop. Our house was incredible: three bedrooms, a huge kitchen, backyard with a pool, hot tub and BBQ, and a neat art deco atmosphere. Deciding on the house was definitely the best option for us, since we did some grocery shopping our first morning there and were able to cook most of our meals. The shuttle service is super frequent and the only complaint I have is that we were one of the very last stops, so we were quite a far drive from the venue. That being said, our house was a lot more reasonable than if we stayed somewhere closer.

There were a ton of food and drink options too, not to mention before and after parties! Not that I attended any after parties… I was too tuckered out from the days in the sun and the nights of dancing! 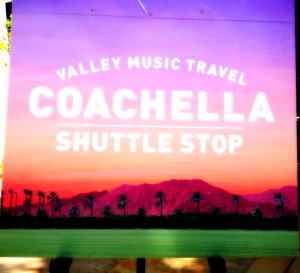 At all other concerts and festivals I have been too, I’ll be honest, the beer tents are more annoying than anything. You have to wait in an excessively long line to get in and out, the tents often only offer beer with long lines, and you have to chug your drink before you can get near the stage. But not at Coachella. The beer tents are strategically set up so you can get a good spot to watch the performers while in the tent, enjoying your bevie.  They had a ton of different options, including Absolut Vodka tents with amazing drinks, DJ’s and photo booths. What a way to start the afternoon everyday! 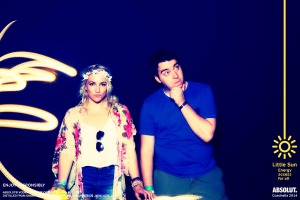 Music fills the air in every direction you turn. People of all ages sway to the beat, eyes closed, living in the moment. The laid back environment is one of the best parts of Coachella. There’s no pressure (other than getting to the acts you want to see, but even that is easy), and no hassle once you step off that shuttle and are through the gates. Everyone is there to have a good time!

I-Dawg and Me during HAIM

10. My Company. The Overall Experience.

I couldn’t have asked to attend Coachella with a better group of people. It’s important to attend with people who are comfortable with separating and checking out different bands, and happy to meet up at various times throughout the day. Andrew, Meena, Ian and Kieran were the perfect Coachella companions.

Shots on our last day!

The overall experience of Coachella is something I will never forget… it is the most unique concert experience with the most epic scenery and weather anyone could ask for!

There’s art, music, fashion and awesome people excited to experience it all. And I can’t wait to do it again sometime.

Check out this article on weekend two.

If anyone is heading to any concerts/festivals this summer, enjoy! I’m already looking forward to a summer of music!