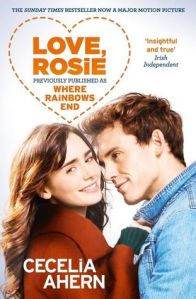 I had never read one of Cecelia Ahern’s books previously, but I’ve heard great things about P.S. I Love You. I decided to pick up Love, Rosie (also known as Where Rainbows End) because of the aligning film that just came out in Britain (it comes out in North America in February 6th, 2015), starring two of my favorites: Lily Collins and Sam Claflin. The film looks adorable and so, in true Kelly fashion, I feasted my eyes on the text before the adaption makes its way to the North American the silver screen in the new year.

One thing I didn’t realize is that the entire story is written in letters; there are no actual conversations. All communication takes place over text messaging, instant messenger, invites, signs, letters and emails. Ahern magnificently navigates her way through a span of years for her main characters, Rosie and Alex, all by way of mail. Who knew a story without the classic fiction methodology could be so compelling?

The book is about two best friends who are in love with one another but never seem to be on the same page timing-wise. Seems like a classic tale, right? Well, the difference with this story is it begins when Alex and Rosie meet as kids and continues as they grow into adulthood. At a young age, the twosome are always getting in trouble together. The story follows the unparalleled duo as they develop into sullen teenagers, still inseparable, until they are forced into physical separation when Alex’s family moves from Ireland to the United States. This plan leaves Rosie and Alex devastated, but Rosie is determined to join Alex in the US and attend college with him once she graduates.

That is, until, life plans change drastically once again: Rosie attends prom with a guy she can’t stand, ends up sleeping with him, and gets pregnant. And while all of her plans of attending college with Alex in Boston are ruined now that she has a baby to raise, the two continue to lean on each other via letters and emails; it’s still the beginning of their journey to finding love in one another. They may be continents apart, but their friendship and love as best friends (and ultimately companionship) is beautiful.

I’ll end with this (a rainbow, perhaps?): I don’t want to spoil the novel (or the movie!) for readers, but I will say that Love, Rosie is a sweet, infuriating love story. Throughout the course of the book, Alex and Rosie keep one another close, despite their marriages, jobs, and schooling, but they never seem to make their timing work. As a reader, this can get really frustrating and I would have liked to have seen a conclusion a bit earlier in the book. That’s my only complaint.

And while I did feel that the book dragged a bit, I also realized how impatient I was for a happy ending. It isn’t until later in their lives, when things come full circle for Alex and Rosie, that they realize they need to stop running from the inevitable: their true love for one another. And I was satisfied when I finally got there with them. 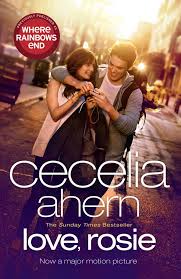