it ends with us; a review 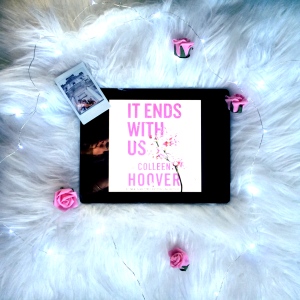 It Ends With Us, by Colleen Hoover. Book Photography by Kelly Furgal Toye

The subject of domestic violence isn’t a typical theme in a New Adult/Romance novel, especially a book by Colleen Hoover. Hoover usually writes well-developed characters with intense stories, lined with a bit of tragedy and a lot of hope. It Ends with Us, while hopeful, is also a tear-jerker and the tragedy in the story hits multiple characters and story lines. It Ends with Us was inspired by real-life events in Hoover’s own past, and as a reader I could feel the passion and emotion in her prose. I hope this book helps those who have been through abuse to find hope and strength, and those who are in a relationship they fear to seek refuge.

The main character, Lily, grew up with a father who abused her mother. Time and time again, she would watch her mother defend and protect her father, no matter how bad the physical abuse got. During Lily’s high school years when her father’s abuse was at its peak, she found an escape in someone else who wasn’t living an ‘ideal’ childhood. She fell in love with Atlas Corrigan, a homeless teenager who lived in the abandoned house down the street. They felt refuge in one another. Sadly, an unfortunate string of events caused Atlas to leave town abruptly, and all Lily could do was hope he was safe and wish him well in his future, wherever he ended up.

Years later, Lily’s father has passed away, meaning her mother is finally free of him. Lily has since graduated college and is on the brink of opening her own flower shop— her dream come true. She meets handsome surgeon Ryle Kincaid on a rooftop patio and is immediately drawn to him. He is strong-willed and intense and Lily despite a nagging feeling within herself, Lily can’t stop thinking about him.

Slowly their relationship develops. Ryle is sweet, charming and possessive, and although his covetous and dominating temperament is cause for a red flag, Lily ignores the warning signs. She soon finds herself in the kind of relationship she swore she never would- one like her mothers. While the downward spiral of abuse and denial continues for Lily, she finds herself reflecting on times with her old boyfriend Atlas. When she runs into Atlas unexpectedly after all these years and he expresses his worry for her, Lily wonders where she went wrong and if her life can ever be right again.

Jam-packed with engrossing plot-twists and harrowing truths, It Ends with Us cogently demonstrates the devastation associated with abuse—and the resilience and bravery of those who survive it.

a couple of pandemic bakers