murder on the orient express 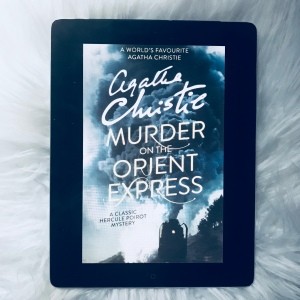 I simply sing its praise, that’s how.

I don’t know why it has taken me so long to read an Agatha Christie novel, being the book nerd that I am. She is dubbed as the Queen of Mystery, having written 66 detective novels and 14 short story collections, plus the longest running mystery play of all time, not to mention several romance works under another pen name. Oh, and she’s a Dame. Bottom line? Christie is one bad ass writer.

I decided to read Murder on the Orient Express  because of the press the 2017 film has received. Plus, I hadn’t read a good old-fashioned ‘whodunit‘ in quite a while. Published over 80 years ago, reading about the lavish train ride that started in Istanbul and traveled through Europe was fascinating: every single character on the train had a story that unfolded throughout the twisting, unsettling tale; I was constantly leaning in, eager to learn more about them. The mystery of a murder progressed, wasting no time, and soon all thirteen strangers on the train are suspects. Unfortunately for the suspects, famous detective Hercule Poirot is aboard the train, and won’t rest until the murderer is caught.

I don’t want to give away anything about how the mystery unravels, so I’ll keep my review short and sweet: this suspenseful mystery offers twists and turns at every corner, and kept me hypothesizing. I constantly doubted my own guessing game, and knew there was a key piece to the puzzle I was missing. The way Christie wove an American kidnapping case into the tale, and the way clues unfolded through Poirot’s tireless investigation was magical. I truly felt as though I was transported to a different place and time; I felt as though I was playing an intense game of Clue.

Murder on the Orient Express definitely made an Agatha Christie fan out of me and proved that well-written mysteries are timeless! If you haven’t read it yet, I highly recommend it. I am hoping to see the film this holiday break, so please let me know if you have seen it and read the novel as well.