Z: a novel of Zelda Fitzgerald; a review 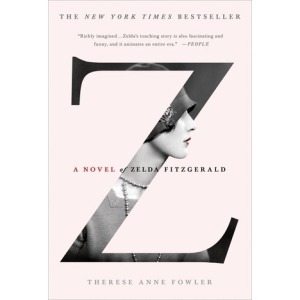 Z: A Novel of Zelda Fitzgerald, by Therese Anne Fowler

There are many who know a vague biography of F. Scott Fitzgerald and his wife Zelda Sayre Fitzgerald. Scott wrote classics such as The Great Gatsby, This Side of Paradise and The Beautiful and Damned, but behind the scenes, he and his wife were also known as scene stealers at parties, always hosting and attending events everywhere from New York to Paris. Anyone who paid any attention to the media in the 1920’s and 30’s are also aware of the couples heavy drinking and public outbursts.

Stemming from gossip formed at private literary soirees, rumors swirled that Zelda’s mental state was what caused Scott to have a heart attack at an early age; her Bipolar disorder (diagnosed as Schizophrenia at the time) was said to have resulted in Scott’s loss of writing inspiration towards the end of his life.  Upon her research, author Therese Anne Fowler recognized all of these rumors and dove into the stories that surrounded the couple, mostly in favor of Scott. Fowler soon found out that there is much more to the Fitzgerald’s than meets the eye, and that there are two sides to every story.

While Z: a novel of Zelda Fitzgerald is a work of fiction, there are many facts and likely situations Fowler includes in her intimate tale. The beginning of the story is romantic: Scott and Zelda meet, and the reader easily falls in love with the iconic couple. Zelda was a fun-loving, eager, outspoken trouble maker, and Scott was a noble, creative, handsome soldier and aspiring writer. Fowler tells the story of true chivalry and even truer love.

However, the beauty of their love doesn’t carry the story peacefully along, nor does the peacefulness last. I cringed many times as I read the novel, all told from Zelda’s perspective.

The tale paints a beautiful picture of what glamour looked like in the 1920’s. Reading about the publishing industry so many years ago was enlightening, and learning that the parties the Fitzgerald’s attended were also attended by the likes of Ernest Hemingway, Picasso, and James Joyce was even more impressive. (Although I will say I have a very different view of Ernest Hemingway now).

Zelda was multi-talented (she was successful in ballet, writing, and painting), yet she constantly felt like a failure. Sadly, her illness was to blame for many of those feelings. I admired Zelda’s strength and honesty, and I loved her for her feminist qualities at a time when ‘pleasing the man’ was the sole duty of ‘the wife.’ She shone brightly with independence and zest for life. Neither she nor Scott were perfect, far from it in fact, but their love for one another was true. I just wish that they had both gotten the help they needed before it was too late.

But I suppose this is a real, true story, not a fairy tale, and love can be devastating and mighty tragic, after all. 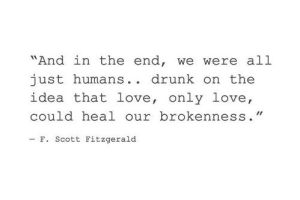