four seconds to lose; a review 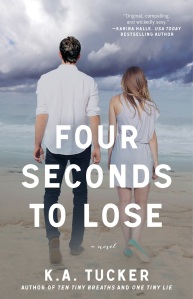 I had the pleasure of meeting author K.A Tucker at this year’s Word on the Street Toronto festival and sat in on her interview discussing “Gossip Girls” in social media and how she incorporates social media outlets into the stories she writes. It’s an interesting topic because social media is forever evolving and changing, so its placement in novels has to be strategic. Key learnings: it’s best to casually mention the use of email, texting and social practices in a story, but steer clear of naming fads.

Tucker writes Young Adult fiction and New Adult fiction (the same genre as my book, but hers is much steamier!) and as soon as she read a few lines from her newest novel at WOTS, I knew I had to buy one (or all) of her books. I ended up purchasing one of the novels in her Ten Tiny Breaths series called Four Seconds to Lose. I was completely engrossed by Chapter Two.

Four Seconds to Lose is split POV between a male protagonist named Cain and a female protagonist named Charlie. Cain had a rough childhood growing up; he was a paid fighter, his mother ran an illegal brothel, and his sister was a drug addict and in dire need of structure.  When he was a teenager and his family was murdered, he vowed to make his life meaningful and help those who have haven’t had the easiest upbringing. The book recalls Cain’s early life, but starts in present day where we find Cain as the owner of Miami’s classiest strip joint (I know, that’s an oxymoron, right?) named Penny’s. Only, Cain doesn’t act like a typical strip joint owner would: Cain cares for his employees, he treats them with respect, and he wants them to think of their time at Penny’s as a step towards a new life. He helps his employees get educated, he gets them off of drugs and away from abusive partners and onto the right path. And Cain never, ever crosses the line with his employees, no matter how beautiful they are. Until Charlie, that is.

Charlie comes along and Cain sees her as unexpected and refreshing. Cain is immediately taken aback by her beauty and the mystery that surrounds her. To the reader, her story slowly unravels as we read further into each chapter. Charlie was raised by her criminal stepfather, who has asked her to traffic drugs for him in Miami instead of attending college. Since she’s terrified of him, she has no choice but to do as he asks.  She decides to apply for a job at Penny’s to make fast cash before escaping her stepfather’s wrath and hitting the road for good, regardless of how much she despises taking her clothes off for money. But little does she know how dangerous her life is about to get… and how much it will change after she falls for Cain. That wasn’t part of her plan…

Filled with darkness, intensity, humor and steam, I recommend this book for anyone who wants a yummy, fast-paced romance. It swept me off my feet! 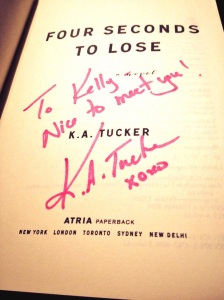