a house in the sky; a review 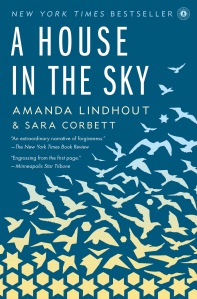 A House in the Sky, by Amanda Lindhout and Sara Corbett

A must read for anyone who likes danger-driven memoirs, captivating narratives and unbelievable page turners. I mean, if you don’t like any of those book characteristics, what do you read?

I don’t want to say much about A House in the Sky, only because I read the story with a clean slate: I didn’t search for Amanda Lindhout’s story on Google, and I didn’t ask anyone to summarize what happened for me. I knew the basics: Amanda Lindhout is a Canadian woman with a love for travelling. On her overseas adventures, she explores worrisome international borders and starts reporting for various news sources.

During her time reporting and travelling, she starts an on-again off-again relationship with Australian photographer Nigel Brennan. Long after they break up, Amanda convinces Nigel to head to a war zone with her: Somalia. Ignited by dangerous situations, muddled by thoughts of invincibility, Amanda and Nigel soon realize that Somalia wasn’t the war zone they’d thought: it was worse.

Within days upon arriving, the two are kidnapped by extremists for ransom money. The next 460 days of Amanda and Nigel’s existence are unimaginable and formidable. The two convert to Islam as a survival tactic, are tortured, threatened, taken to the desert to be shot, and moved from house to house in rural and urban Somalia. The kidnappers want ransom from the Canadian and Australian governments and get increasingly angry as they realize democratic countries don’t negotiate with terrorists.

Reading about Lindhout’s strength is considered eye opening and chilling, most definitely, but as I read the book, I felt as though I was actually watching the story unravel before my eyes. I still can’t believe this woman is only a few years older than me, and had survived something so unbelievable. In the direst situation, Lindhout’s constant bravery and search for compassion and hope is undoubtedly part of the reason she’s alive today.

Co-written with New York Times contributing writer Sara Corbett, this story needs to be absorbed by many. Read this book.