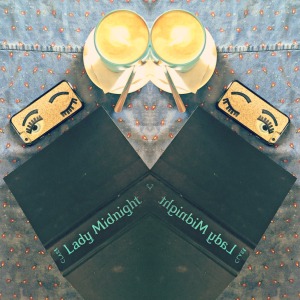 Lady Midnight, by Cassandra Clare. Photo taken at Bonjour Brioche in Toronto, ON.

I had such a mixed set of expectations for Lady Midnight, Book #1 in Cassandra Clare’s new The Dark Artifices series. For one thing, I think I have established in previous posts how much I enjoy The Mortal Instruments series, and all of its characters. I didn’t love how Clare looped Emma and Julian (the main characters in Lady Midnight) into MI6 (it felt a little forced), but after reading all of the Tales from The Shadowhunter Academy series (these novellas take place after the last Mortal Instruments book), I had a new understanding and appreciation for how the Dark Artifices series was going to be set up. While I thought a lot of the Tales from the Shadowhunter Academy novellas felt rushed and quickly edited, I did enjoy moving forward with the Shadowhunter world. By the time I was finished, I was ready for Lady Midnight, and I hoped that the two main characters would draw me into their story. (Warning: do not read the rest of the post if you don’t want Mortal Instruments 6 spoilers!)

Lady Midnight takes place five years after MI6 ends. While our favorite usual suspects (Clary, Jace, Magnus, Alec, Isabel, Simon) make cameos throughout the story, Lady Midnight truly is about Emma Carstairs and her best friend Julian. Emma and Julian live in the LA Shadowhunter Institute, and essentially take care of all of Julian’s younger brothers and sisters. Both teenagers are orphans, and both have heavy responsibilities on their shoulders. Julian feels like he has to act as the father for his younger siblings, and Emma is always getting into some kind of trouble as she searchers for clues as to who killed her parents five years prior. And as readers will quickly find out while starting Lady Midnight, Julian is also hiding his love for Emma.

Usually this is a scenario that we see over and over again: two best friends in love with one another, but there is a hurdle they must overcome in order to be together. In this case, Emma and Julian are parabatai, meaning they are connected through a special ritual, and the Shadowhunter world forbids parabatai from ever being together romantically.

There is so much more to this book than the addicting forbidden love story between Emma and Julian though. In Lady Midnight, we are exposed to new characters from other institutes around the world, as well as family issues when Mark, Julian’s older brother, is returned to the family by the Wild Hunt. The Wild Hunt had taken him five-year prior, and his family had not seen him since.

Of course, there were times I rolled my eyes as I read this novel. At times it felt as though Clare was trying to replicate the MI series with similar situations and scenarios. There were a few scenes that felt forced, and I wondered if they were overkill. I even found a few mistakes (for example, a character had been sitting in the passenger seat of a car, and in the next paragraph down, they were sitting in the back seat, but it wasn’t written anywhere that they had moved), and I thought that finding these small mistakes meant that the novel was edited too quickly.

But, that being said, I did really enjoy Lady Midnight. I read the massive book in a few days time. It kept me up at night, and I loved how strong Emma’s character was. It was neat to see the woman she had grown into after reading about her in MI6. If you are a follower of my blog, you probably know that I am such a softy when it comes to relationships and love stories, and it killed me to read what Emma decides to do at the end of Book #1 in this series. But of course, my emotions are a testament to how well written the Emma and Julian characters are.

Before I wrap up, I would quickly like to touch on the short story that appeared at the end of Lady Midnight. If you haven’t read the story yet, stop reading here as I don’t want to spoil anything for you. BUT OH MY GOSH!? JACE AND CLARY?! Will someone please help me try to understand why Clary wouldn’t want to marry Jace? They are obsessed with one another!

Thanks for reading! Hopefully you enjoyed Lady Midnight as well; I would love to hear your thoughts. I wish there wasn’t such a long wait for book #2, but I have lots more novels on my shelf to keep me occupied in the meantime!