the one that got away; a review 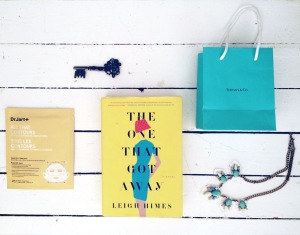 The One That Got Away, by Leigh Himes

Abbey Lahey is instantly charming to readers, captivating us with her clumsy, self-deprecating nature right off the bat. No, she’s not charming in the “wow, her elegance and beauty takes my breath away” kind of way, but more in the “Abbey is a super relatable, frazzled, hardworking mother and wife who is probably wearing day-old mismatched socks and has a smidgen of toothpaste on her collar” kind of way. In Leigh Himes breakout novel, The One That Got Away, protagonist Abbey Lahey is someone who we can all look at and say “I’m her” in one scenario or another. She pokes fun at herself, she lets her boss talk down to her, she struggles juggling her two children, she and her husband fight over finances… all of these things make her extremely relatable to a middle class woman in North America. And it isn’t long before Abby finds herself wishing that her life were different, and that maybe she would be happier, had she taken a different route.

When returning an overpriced bag to Nordstrom’s (today’s source of her woes), Abbey doesn’t realize that her wishes are about to come true. She slips and falls on an elevator in the store, and wakes up in a hospital bed. Only, her husband Jimmy isn’t the one there when she wakes up.

Abbey van Holt is the new Abbey… at least, that’s who she wakes up as. Her doting husband, Alex, is waiting by her side as she wakes up and tries to make sense of this new world. Abbey think she must be living in some kind of parallel universe and keeps waiting for things to go back to normal… except, they don’t. Abbey must quickly pick up this new life that she has always wanted and keep up with it all.

Abbey van Holt isn’t as relatable. She’s got stylists, a nanny, a driver, and a wealthy husband who is running for congress. She doesn’t have to work, cook or clean. Abbey is now who she has always aspired to be, or so she thought.

The One That Got Away makes readers think twice about wishing for everything they don’t have, and appreciating what they do have.  I thought it was comparable to Sex and the City’s cleverness, while exuding Sophie Kinsella-type charm. Himes is a very descriptive author, which is not everyone’s cup of tea, and I did find her writing funny and refreshing.

TOTGA is a light piece of women’s fiction, but surprisingly deep at times as well. Abbey pulls real answers out of herself as she struggles in her new life; she’s forced to face her past head on and come to terms with what it means to be Abbey Lahey: someone who thought she didn’t have it all and now aches to have her simple, flawed life back. It’s a read I would recommend to those who love Nicholas Sparks, humor, romance and of course: New York City!

A big thanks to Hachette Books for the advanced copy! Grab yours today!

Tagged as: #TOTGA, #whatif, Book Club, book review, Debut Novel, Hachette Books, Leigh Himes, Summer Reading, The One That Got Away, What If, women's fiction