grace and fury, a review 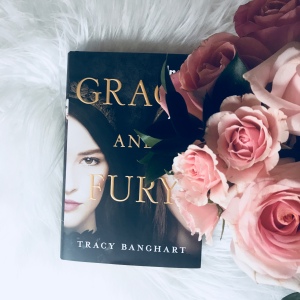 Grace and Fury, by Tracy Banghart

I just finished one of “Heather’s Picks” from Indigo (for those of you who are not Canadian, Indigo is Canada’s Lifestyle and Book Store), and I was so impressed!

The story, Grace and Fury by Tracy Banghart, is a tale about two sisters who live in a world eerily reflective of the potential future of today’s society. Women don’t have many privileges: they aren’t allowed to learn to read, and are trained either to be a “Grace” for the King and his Heir, or a handmaiden or factory worker. Selina is chosen to be a Grace finalist and she brings her sister Nomi along to the capital where her fate will be decided.

But nothing turns out as planned. Serina, who had been training her entire life to be a Grace, was not selected. Instead, her sister Nomi was. And the day after Nomi was selected, Serina is caught with her sisters book in her hands, and is sent off to prison on an island, never to be heard from again. Nomi is hell-bent on finding her sister, but can’t trust anyone in the castle, least of all the King and his Heir.

This story is a refreshing tale about two sisters who are caught in worlds that are a far cry from the kind of society they want to live in. Repressed and isolated, their love of one another helps them to persevere. It’s a story of growth, love and betrayal, and I can’t wait for the second book. If you are a fan of The Selection or the Hunger Games mixed with The Handmaid’s Tale, this series is perfect for you!