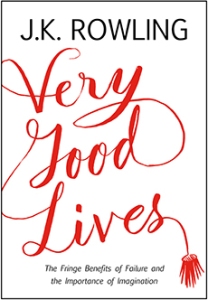 It’s hard to review J.K. Rowling’s Harvard speech, Very Good Lives, The Fringe Benefits of failure and the Importance of Inspiration. Why? Because it was a powerful speech when she gave it, and it’s just as powerful today, years later. I also don’t want to spoil it; it’s short and to the point, yet oh-so-inspirational.

“Years after her visit to Harvard, people still talk about it—and still find inspiration in her singular evocation of the idea that living a meaningful life so often means daring to risk failure. What a powerful example she embodies, and what a remarkable gift her speech was, and is, for all of us privileged to hear it then—and to read it now.”

There are many memorable statements in Rowling’s speech, and while I won’t give them all away since I think her words of wisdom are a worthwhile read for everyone, I did want to highlight a few of my favorite inspirational excerpts:

1- “So given a Time-Turner, I would tell my twenty-one-year-old self that personal happiness lies in knowing that life is not a checklist of acquisition or achievement. Your qualifications, your CV, are not your life, though you will meet many people of my age and older who confuse the two. Life is difficult, and complicated, and beyond anyone’s total control, and the humility to know that will enable you to survive its vicissitudes.”

2- “If you choose to use your status and influence to raise your voice on behalf of those who have no voice; if you choose to identify not only with the powerful but with the powerless; if you retain the ability to imagine yourself into the lives of those who do not have your advantages, then it will not only be your proud families who celebrate your existence but thousands and millions of people whose reality you have helped change. We do not need magic to transform our world; we carry all the power we need inside ourselves already; we have the power to imagine better.”(Beautifully stated).

3- “I am nearly finished. I have one last hope for you, which is something that I already had at twenty-one. The friends with whom I sat on graduation day have been my friends for life.  They are my children’s godparents, the people to whom I’ve been able to turn in time of real trouble, people who have been kind enough not to sue me when I took their names for Death Eaters. At our graduation we were bound by enormous affection, by our shared experience of a time that could never come again, and, of course, by the knowledge that we held certain photographic evidence that would be exceptionally valuable if any of us ran for prime minister.” (This one really tugged at my heartstrings and reminded me of my own close friendships that I share with so many of my university friends.)

When I taught English in South Korea I had a student approach me, so happy that we had had a conversation in class that day about Harry Potter. She told me that she never was able to talk about the series because her parents forbid her from reading any books that weren’t textbooks. She told me that she had to hide her Harry Potter books under her pillows and read them in the dark with a flashlight so her parents wouldn’t find out.

Of course it’s saddening that this little girls parents didn’t want her to exercise her imagination and have any creative outlets; but it didn’t matter because she did it anyway. That is the type of inspiration, imagination and determination Rowling brought to the world with her beloved series, and continues to with words like Very Good Lives; words that we should all really absorb and take to heart.

Pick it up your own copy today and support a good cause, as all proceeds go to Rowling’s charity, Lumos.