infinite in between; a review 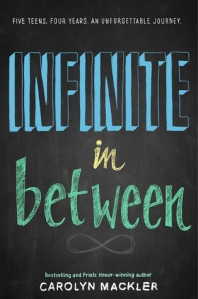 Infinite in Between, by Carolyn Mackler

I saw this book promoted on Twitter and immediately put it on my “YA- Must Read” List. In this story, award-winning author Carolyn Mackler takes her readers through a variety of different high school experiences. There are five main characters in the story, all starting grade nine together, and assigned to the same orientation group. While each individual goes through different friends, tragedies, and experiences throughout their four years of high school, the orientation letters they wrote to themselves back in ninth grade connect them all.

I thought the carefully woven stories were well-thought out, overall. The number of trials and tribulations a high school kids goes through as the make their way to adulthood varies, but Mackler does a great job of capturing five very different, very realistic perspectives. She covers everything from sexuality, death, first loves, parents’ divorce, peer pressure, fame, jealousy, and loss of virginity, to part-time jobs, changing of friend groups, alcoholism and drugs, preparing for college and internal growth.

I will say, that at times I found a few of the plot points and story crossovers a little too convenient and contrived, and I did sometimes wish that each character was written in first person narrative to get even further inside their heads, but overall I enjoyed each characters story, and was quite content with the ending. It’s an easy YA read and Infinite in Between is a dose of reality of what it’s like to be a teenager in today’s western world.

Tagged as: book review, Carolyn Mackler, Infinite in Between, YA, young adult