before I fall; a review 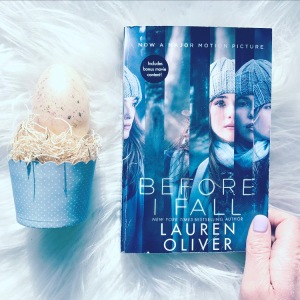 “Funny how you can know your friends so well, but you still end up playing the same games with them.”  – Before I Fall, By Lauren Oliver, Page 51

Before I Fall is the contemporary teenage version of Groundhog Day. Lauren Oliver’s Young Adult novel (now a feature film, starring Zoey Deutch, star of Vampire Academy) follows a day in the life of Samantha Kingston. She’s a popular, fun girl in high school who has an endlessly bright future ahead of her… or so she thinks.

Samantha Kingston is dating the most coveted guy in school. She has 3 adoring best friends, whose banter is realistic (meaning often cruel and catty; after all, we are talking about teenagers here) and is happy being at the ‘top’, never stopping to think about how her actions are affecting others.

The novel begins with Sam’s morning on ‘Cupid Day,’ otherwise known as the day before Valentine’s Day. The reader walks through the school day with Sam, cringing when she laughs at the expense of others and applauds her best friends for their harshness. Sam isn’t the ring leader of her clique, but she is certainly no angel. (Side note: One of the elements I enjoyed most about this story was just that: all of the protagonists are flawed. They are mean girls. They have a lot of life left to live and a lot of learning to do. I found this portrayal of high school girls so accurate). During the evening, Sam and her friends attend a party where ‘shit hits the fan’. I don’t want to spoil anything for those who are interested in reading the book, but I will say this: the mean girls never saw “it” coming. After the party, Sam and her friends drive home. This is when the car accident occurs.

Sam wakes up the next day, convinced the car accident is a dream. Instead, she quickly finds that she is living Cupid Day all over again. Sam is creeped out, but is convinced she is being given a second shot. But as the reader is well-aware, Sam isn’t going to ‘get it right’ her second time reliving Cupid Day; as I mentioned above, she isn’t very self-aware.

The novel follows Sam of day after day, as she works to make changes. Little actions she takes lead her in a different path in some respects, and ultimately down the same path in other ways. As I read, I constantly wondered the existential question: ‘is she destined to die, even if she makes the right decisions in the end?’

This book was an emotional read, but a great one all the same. I have read a few of Lauren Oliver’s books, and this one is definitely my favorite. I recommend Before I Fall, especially for fans of books like The Fault in Our Stars,  Infinite In Between, and Maybe One Day.

Has anyone seen the movie? What were your thoughts? I’m looking forward to seeing it!

Tagged as: Before I Fall, Before I Fall Book Review, Before i Fall Movie, book review, Infinite in Between, Lauren Oliver, the fault in our stars, Zoey Deutch

the remnant chronicles, a review

a very punchable face, a review