the thousandth floor & the dazzling heights; a review 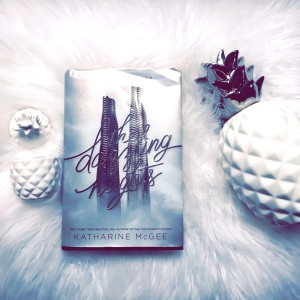 I reference The Thousandth Floor series as “Gossip Girl set in the future… but darker.”

Katharine McGee’s first two books in her bestselling series, The Thousandth Floor and The Dazzling Heights, were compelling page-turners that hooked me instantly. The Thousandth Floor opens with a murder. The reader doesn’t know who was killed, who committed the act of violence that caused one of the main characters to plummet to his/her death, if they actually died, and why it all happened to begin with. It’s instantly intriguing.

McGee keeps readers guessing at every turn, through the alternating narrative of five main characters with unlikely common interests. These characters live in Manhattan in the year 2118, residing in the custom-built supercity… floors and floors making up a newer, cleaner version of Manhattan. The idea is the higher the floor you live on, the more affluent you are. McGee weaves the five characters stories together brilliantly, and although they live on different floors and socialize with different groups, the reader will be privy to how the murder situation unfolds by the end of Book One. However, it’s important to remember that not everything is as it seems.

The Dazzling Heights (Book Two in the series) isn’t is standard follow-up story; it’s riveting and just as fast-paced as the first book in the series. The Dazzling Heights introduces new characters, some of who initially act as villains. McGee does a brilliant job at making our feelings flip-flop from annoyance to empathy when judging the villains in the story. She does this by giving us insight into their complicated back story and their raw emotions. McGee plants twists and turns in every chapter, and I cannot wait to read the conclusion.

The Thousandth Floor series isn’t your typical sappy YA one-off with a proverbial happy ending… at least the series hasn’t been so far. And while I am hoping for a happy ending for a few of the characters, (I’ve grown attached to them!) I will admit that I like the darkness element this series offers. It’s smart, intriguing, and relevant. And despite being set in the future, the reader is given a glimpse into what could be, and it is alarming, creative and possibly inevitable.

If you like YA and want to dip your toe into a sci-fi mystery that isn’t over-the-top, check this series out now!

a couple of pandemic bakers